Adam is an Associate Director, SEO, at Stella Rising

On August 11th, I woke up and checked Twitter as I frequently do. I saw that Independent SEO Consultant, Dr. Marie Haynes, had tweeted this: 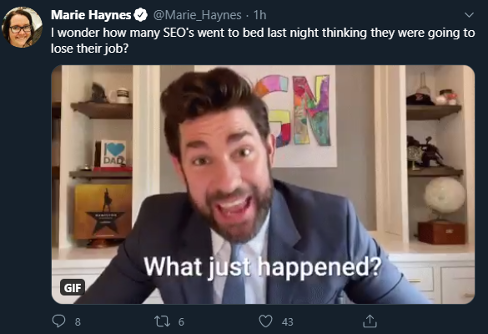 That tweet, of course, gave me cause for concern. At the time, it seemed that whatever happened had resolved itself, but SEO is an ever-changing world where one company can see massive gains while another can drop off the face of the Earth, all at the same time. So, our team quickly went to the analytics.

This graph depicts the rankings we saw for one of our clients:

While that example was one of the worst, dozens of other sites told a similar story. By the time we had started reviewing those profiles, though, the changes had been reverted. Overnight, John Mueller, Webmaster Trends Analyst at Google, had clarified that it was a “glitch.”

That’s what I get for going to bed at a decent hour for once.

For those of us who work in SEO, digital marketing, or on an ecommerce brand, this situation is our worst nightmare. A thousand worries ran through my head: algorithm updates and clients giving notice, while even considering changing industries and transitioning into something less stressful, like firefighting or politics. And we already knew that the ranking drops likely weren’t even real! I can’t imagine what my blood pressure would have read had I checked it the night before.

A discussion cropped up on Twitter to do with the negatives of being dependent on a single company for digital strategy. Those negatives are real—if your brand’s revenue is based entirely on Amazon or Google Shopping, you ought to consider diversifying, and fast. But what about SEO as a channel? Google owns 86% of the market for organic search, and since the same site is served up to every search engine, it’s exceedingly difficult to diversify without risking damage to your brand’s Google traffic. So, how can we approach this SEO conundrum strategically?

Jokes about quitting the industry aside, SEO has long since shifted away from a strict “keywords increase Google traffic” methodology; it is high time we considered the implications of algorithm updates, glitches, and Google gobbling up organic traffic. Here are ways that Stella Rising is focused on getting ahead:

This instance may have been a glitch, but the next big update might not be. Through smart SEO strategy and execution, our team sees the wisdom in preparing for the worst, given the current climate.