This is not your typical end-of-year search predictions for a 2015 article. Instead, it’s my attempt to make a point about next generation SEO. If you still want to get your search hits for free, you’re going to have to actually have to become a genuine, trusted and authoritative voice in your keyword-space, which in-turn will give you the ability to impact the search positions of content in that same space. In other words, you increasingly have to walk-the-walk if you want to talk-the-talk—or at least, be heard and found over all the other voices.

Unfortunately, this means that you, the online influencer (this article addresses a wide audience), actually have to become an expert in at least TWO things: communicating effectively as a marketer, plus having your area of expertise for which you’re trying to become recognized. And rarely is that the same area as that of your clients’. So for example, if I have a propensity to be found in Google natural search for programming, I can’t necessarily use that to secure strong search positions for a client who sells shoes. They are in different “keyword space”.

You can’t directly impact the search results for a client through your own authority in an unrelated space. Instead, you can use the knowledge and wisdom of having done it for yourself to help your client do it for themselves—or alternatively, enlist the aid of a brand ambassador who’s already done it for themselves in your client's keyword space. In other words, the field of SEO and Social Media optimization becomes a form of coaching and alliance-building. But you yourself should be qualified to actually serve as a brand ambassador in the field in which you claim expertise.

Google Authorship Not Quite Dead

Getting the idea? The age of better SEO through technical trickery is winding down as a new sort of link-graph based on people and their activities ramps up. This is why Google Plus is consistently such a large factor in natural search. Remember, authors get dropped into “Circles” which themselves are keyword-ed, creating a new sort of link-hub in which people are placed at the center. Spiraling out from these hubs is content produced by these authors, each of which is a node with its own +1 popularity counters clicked by people who themselves may have been dropped into circles and are building their own authority. This all results in neighborhoods-of-trust that intertwine people with content through authorship and expressions of affinity. All with high levels of accountability.

While Google may have recently just dialed-down the visibility of verified authors with the removal of authorship from search results, in all likelihood, they are just transitioning from an easily spammable explicit form of author verification to a more subtle and difficult-to-manipulate implicit form. It’s much easier to track the goings-on of a few billion individuals versus nearly infinite web pages.

For all intents and purposes, web content has undergone hyperinflation because producing new content (often worthless but still able to trick Google) is free. This is as opposed to real human beings with real verifiable identities and a trail of associated web-activities (such as authoring, expressing affinities, etc.) that is much more difficult to fake over the course of a lifetime. Rights of anonymity and privacy aside, YOU become the new gold standard of relevancy. In Bitcoin terms, YOU are the unit of unique value, because it took a lifetime of work to produce your online signature.

So after all that by way of exposition, let me now explain to you how I’m doing it for myself, using my two latest projects as the vehicle, Pipulate and Levinux. First, I’m making sure that they’re all about helping YOU. They are free and open source software (FOSS) for SEO and Social Media—a sort of Swiss Army Knife of functionality that can be molded to all sorts of custom needs. Developing this and offering it to you is the walking-the-walk I spoke of. Over time, I will accumulate something of a community (or a “Tribe” in Seth Godin terms) that uses these tools. 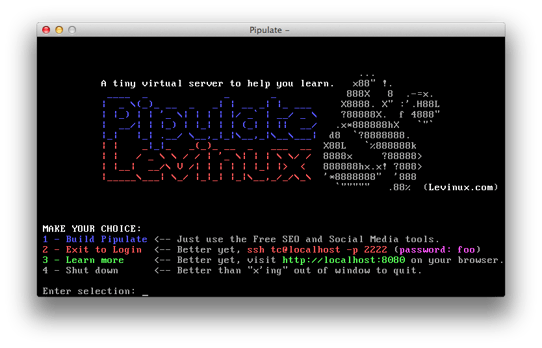 Everyone needs SEO tools, and back when Google allowed the referrer variable to be passed along, SEO was a science and site optimization could be practically automated, as with the HitTail writing-topic suggestion tool I developed in 2005 (still going strong) practically guaranteeing an incremental traffic build via new content rigged-to-succeed—informed as it was by the bright glowing trail left by keyword referrer data. But ever since the removal of the referrer variable, the science has been getting leached out of the field of SEO. Back then, it was cheap and effective to just passively sit back and analyze the data coming to you by listening to your own referrer variables on the search hits, and algorithmically determine where your weak spots were and where you could be doing better. BAM! Even the little guys could use big secret weapons. This is the older image of SEO from the mid-2000s as the great leveler of playing fields in marketing. I intend to bring back a little bit of that feeling.

That cornerstone of SEO science is now destroyed. Or at least, you have to go to Google Webmaster Tools for an inferior copy of that data that aggregated away most of the useful granular information that fed the auto-optimization algorithms. Today, SEO products need to do the much more expensive process of actively going out there and examining lots of data on the Net, much like the Googlebot crawler itself—this is the route Majestic SEO has taken for link-analysis and BrightEdge has taken for search position monitoring. It's much more expensive, and often times shuts the little guy out of the SEO game.

That is, unless I’m successful. By combining two of my projects here at Flying Point Digital in my new role as SEO Director: Pipulate and Levinux, I intend to recapture and rekindle some of that prior era of SEO for those who notice and follow along.

The first is Pipulate—the natural next step after something I made in 2010 called 360iTiger, which crawled websites directly into spreadsheets and then did second-stage look-ups on the URLs, such as how many times each was liked, tweeted and +1’d. The value for monitoring SEO and Social Media performance is obvious. Additionally, it was back-ended by easy-to-write Python functions, so the system could rapidly grow and be connected to unlimited different services, like Google Analytics and MajesticSEO. But whereas 360iTiger was tied to Google Spreadsheets, the new system will optionally work stand-alone. There’s no service to sign up for. There’s no annual subscription fee. Just download, double-click, and go visit it on your Web browser.

This is possible because of my own distribution of Linux (actually, a remix) called Levinux. With Levinux, I make the Pipulate server run right on your own desktop, using your own processor and your own own bandwidth. This is a lot like just downloading software and running it on your own desktop or laptop computer. However, there is actually a completely old-school Linux server sitting right there. This means, you could use it for other things—not the least of which is understanding how stuff like this works, contribute to the project or even do other projects like it for yourself. Once you understand it, you can run Pipulate separate from Levinux, installed directly on your own Windows or Mac computer, or onto a cloud server, $35 Raspberry Pi credit card sized computer, or anything that can run Python with a Net connection.

If all this just sounds like so much techno-babble, don’t worry. I’ll be putting out a series of YouTube videos to make it all clear, as I eat my own dogfood. If you start following the videos now, you’ll be jumping on the bandwagon early, and helping to shape the product. It will begin modestly enough, taking in a list of URLs, and doing many of the basic look-ups you can do against a URL: pulling on-page content, such as titles and metas. It will also do many of the important social look-ups, such as how many times a particular URL was liked, shared, +1’ed, and tweeted.

There is no website to register at, and no credit card to enter in for a trial service. These capabilities are just yours to use without cost or restriction. The code is free to look at, modify, and start learning from. The functions can be expanded by you immediately, if you’re willing to take the plunge into programming. And if not, then just follow along while me and whatever early adopters I accumulate start expanding the system.

I’m delighted to be onboard here at Flying Point Digital, and every Friday you can expect a flurry of videos from me documenting my progress on Pipulate and Levinux. Beta 3 of Levinux was just released, and you can download it now, unzip the archive, double-click the icon that corresponds to your OS, and after it's booted, choose Option #1 to get Pipulating. You can also watch the presentation or get on a list to learn more.