An Inside Look Into The New AdWords Interface

Google first announced it was redesigning the Google AdWords Interface on March 28, 2016. AdWords has not undergone major interface changes in 15 years. In their announcement, they mentioned they would be inviting advertisers along the way to try out the new interface. This month we officially got our invite.

We’ve spent some time analyzing the new interface & we’re impressed.  Although it has taken some time to get used to the new set up, it is easier to navigate & the load time is much faster. Keep reading to learn the top 5 changes & how it will impact the management of campaigns.

1. Segmenting Search, Display & YouTube Campaigns: If you are running search, display & YouTube campaigns, then this feature is for you. In the current AdWords Interface, we add labels or manually filter to divide our search, display or YouTube campaigns. In the new user interface, the secondary navigation bar located on the left side of the screen allows for quick access to the data. In one simple click, we have access to a visual dashboard with our cost, clicks, top spending keywords, device performance, & daypart performance.

2. Visual Dashboards: The new visual dashboards allow for easy data analysis. One of our new favorite widgets in the dashboard is the device widget. In the current interface, the device tab does not have a visualization of the data. We have access to the numbers for the metrics, but we are not able to make a quick analysis. We can now see how our accounts and campaigns are performing for three metrics at one time in a bright visual. 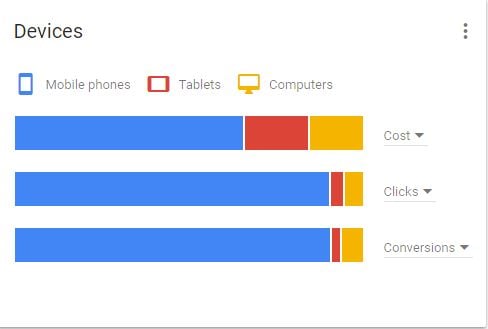 3. Faster User Interface: Many of us have never ending to-do lists, so it is important to be able to navigate through the interface quickly. In the current interface, the platform sometimes takes a while to load. When navigating through the new UI, the speed of the new interface does not disappoint. We were able to move from campaign to campaign with ease.

4. Navigation: Another major change to the current AdWords UI is the removal of the usual navigation tabs for Campaigns, Ad Groups, & Settings. In the current version of AdWords, they are located at the top of the page. In the new version, they are located in the left-hand menu. Ad extensions & ads are also now grouped together in their own tab for less clutter & faster workflows. According to Google, “You can quickly make the changes that move your business forward.”

5. Advanced Bid Adjustments Tab: A never before seen AdWords feature is the new advance bid adjustments tab. We are now able to set a bid adjustment for each “interaction type”. An “Interaction” is any action associated with a specific type of ad. Interactions can be clicks, calls from call extensions, and more. Ads can generate several kinds of interactions, depending on the type of ad or interactions you set up using extensions.

In the example below, we can set a bid adjustment for the interaction type: calls.  While the feature is still being developed, and we have not fully tested its impact on performance, we are excited about the potential of this new feature and its ability to prioritize specific actions over others.

Need experts to manage your AdWords campaigns? Contact us today!